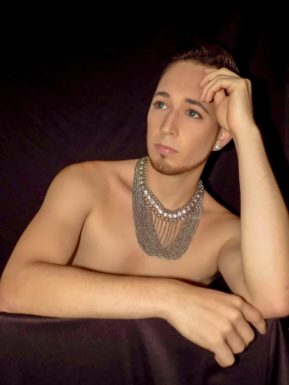 A way to express himself. That’s what drag did for Landon J. Fatale.

Landon is one of several drag performers participating in “Fascination” presented by the Haus of Fatale, which is Saturday, March 14, at Hill Country Community Theatre, 4003 FM 2147 in Cottonwood Shores. The event includes a meal catered by Super Taco and desserts. A cash bar will be open.

Tickets for this show benefiting the Highland Lakes Equality Center are $35 for one, two for $60 or four for $100.

In high school, Landon was a member of the marching band then switched to the color guard for two years. But after graduation, he missed performing.

After moving to Houston in 2016, some friends took him to a couple of bars where he discovered his passion.

“That’s how I came upon the drag scene,” he said. “That was the outlet that drag gave me.”

Performing, however, is only one part of the attraction for Landon. The other is the creativity that includes the wardrobe, the choreography and all the other bits in between.

It also gave him a family as a member of Haus of Fatale. He met Aries and Luis Fatale, the co-creators of “Fascination,” when they were competing  in 2017. Landon said he knew right away the type of hearts Aries and Luis have because they stopped Landon to help him fix his outfit before he took the stage.

“All the emotion that gets put into it,” he said. “Everybody comes together, the teamwork. As a family, we rely on each other. We’ll also give. None of us want the other person to go on stage and not look one hundred percent. We’re there to support each other, no matter what.”

What he didn’t know right away was how close the three would become. That happened as they messaged each other regarding how they were doing and kept up with each other through the drag scene. Aries and Luiz’s encouragement is what kept Landon competing in preliminary pageants, which are events before the main pageants begin. As a result, Landon became the couple’s drag son.

“They were concerned,” Landon said. “That’s what drove me to them. I chose them. They were genuine people. They felt for me and care for me, not only as an entertainer but as a person.

“Before I moved to Houston, I didn’t need anyone,” he added. “I had my biological family, but I moved away from my family and friends. It wasn’t until I started drag that I discovered my family. We may be a group of friends that love entertainment, but I consider them family. It gives me a support group and people to go see. They want to see me succeed in every part of my life.”

That happened quickly as Landon was named Mr. So You Think You Can Drag 2018 and Mr. Gay Central Texas 2019.

Like the other “Fascination” performers, Landon said he is thrilled to be apart of something that will help an equality center committed to assisting the LGBTQ community.

“We want to help out anyone who needs help and do different performances or be part of different shows,” Landon said. “I love to give back to the community and help in any way I can.”