Kian Alexander Fatale found his calling as a drag entertainer 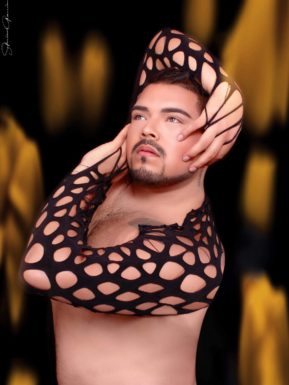 Kian Alexander Fatale found his calling as a drag entertainer

Shortly after they decided to perform in another benefit drag show for the Highland Lakes Equality Center, Aries and Luiz Fatale began assembling a short list of entertainers they wanted to invite.

Top of the list for “Fascination” presented by the Haus of Fatale were the performers part of the Fatale family, including Kian Alexander Fatale.

“Fascination” presented by Haus of Fatale is Saturday, March 14, with a catered dinner served by Super Taco at 6:30 p.m. and the show will follow at the Hill Country Community Theatre, 4003 FM 2147 in Cottonwood Shores. Tickets are $35 for one, $60 for two, and $100 for four. A cash bar will be offered.

Kian is one of Aries and Luiz’s drag sons, which means they mentor Kian in all things in drag entertainment: costumes, stage presence, performing and offering advice.

“We may not see something on ourselves they see that can be changed to up it up more,” Kian said. “Basically (Aries and Luiz) are people who go out and make names for themselves. They’re making a stamp on the community and younger performers. It’s your chosen family. They see you and want to help you out more.”

Haus of Fatale is much more than a bunch of performers with the same last name, Kian said.

“You’re good friends, you become this entity of people who come together looking for the same things in life,” he said.

Kian began his drag career about five years ago as a drag queen. He got tired of the preparation, so he decided become a male entertainer three years ago.

He realized early on that performing fulfilled him in a way few things do. In high school, be began dancing and continued after graduating. When he discovered drag, he heeded his calling.

“It was an outlet I was able to use … if I was upset,” he said. “It’s more of something fun to do to get out there and perform.”

Growing up in Houston, Kian knows the importance of having an equality center and the impact it can have on a community because it allows people to be their authentic selves without being worried or scared.

“I’ve seen kids get kicked out by their families,” he said. “It’s a community that sticks together when it needs to stick together.”

Kian, who is dating male entertainer Landon J. Fatale who also is performing in “Fascination,” said the couple is a lot like Aries and Luiz when it comes to helping the LGBTQ community.

“That’s what really made me want to be friends with them,” he said. “They give back to the community when they can. We do benefit fundraisers. We have fun and do what we love to do.”

As for “Fascination,” Kian said attendees should get ready to have a great night because it’ll be one they’ll talk about long after the curtain drops.

“I’m really looking forward to it,” he said. “It’s my first theater stage show. Having a performance space dedicated to theater is really intriguing. I want to see how that plays out. I’m excited about it. To everyone seeing the show, I thank them for letting us do a show on for them. They’re going to have a good time when they’re there.”