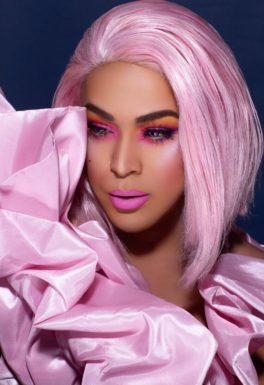 One night in May gave Anthony Flores a night he won’t soon forget.

While he was drag performing as Miss Toni Andrews at HEAT Nightclub in San Antonio, superstar Ariana Grande was standing near the stage. She was visiting the Alamo City as part of her concert tour and decided to check out the nightlife. Toni wasn’t supposed to sing Ariana’s songs but changed up his routine to honor the megastar.

After he finished performing, Ariana gave him a tip. Her appearance reinforced what the drag performer is all about — helping the LGBTQ community and raising HIV awareness.

That’s why when Toni heard of What A Drag! presented by Rae’s RBar and Grill and Haus of Fatale, from Luiz Fatale and Aries Fatale, he knew he wanted to be a performer.

“I love the Fatales,” he said. “They are a gorgeous couple. They have random yet positive events they’re apart of. I’m all about speaking toward the taboo of what people understand.”

What A Drag! is at 7 p.m. Saturday, Sept. 14, at Smithwick Dance Hall located at Heart of Texas Ranch, 205 Hickory Creek Road in Marble Falls. Super Taco is catering the meal and a cash bar is available. Tickets are $25.

While Grande’s appearance is a highlight for Toni, it’s not the only one. He credited drag for showing him different parts of the world, while allowing him to do what he loves — sing and dance.

Toni will celebrate 13 years as a drag entertainer at the end of this year. He started his career thanks to the help of drag queens who sneaked him into clubs to perform in amateur talent nights while he was a high school student. Being on stage was natural for Toni; his uncles played in a Christian band and rehearsed at home or at Toni’s grandfather’s home. He often lip synced to the songs as his uncles were rehearsing in the backyard.

He wanted to be a dancer but watching the drag performers changed everything.

He began as an andro performer and painted words on his body using shoe polish.

Toni was a fan of many of the female artists of the 1980s and 1990s, including Janet Jackson, Paula Abdul, Madonna, Jennifer Lopez and the Spice Girls. He often lip synced to their songs and spent hours in his room rehearsing. But he noticed the drag performers weren’t lip syncing, and that propelled him to change his act.

He has always been able to make a living off being a female performer and hasn’t strayed too far from what he loves — Pop Top 40. His role model is Victoria Beckham, aka Posh Spice, because of her ability to transform. She has remained in the public eye despite the Spice Girls not having a hit in years because of her clothing line, her marriage to David Beckham, who is one of the top soccer players of all time, and her family.

He credits Lopez for pushing him to learn choreography because it was different from Britney Spears and Christina Aguilera. His most recognized impersonation is of JLo, he said, and he’s also mimicked Katy Perry and Cardi B.

“JLo is my favorite, it’s very familiar,” Toni said. “I also have a really good Katy Perry. It always, always gets people talking.”

As he improved as a performer, he traveled more. When he flew to New Mexico, he realized he accomplished something his dad hadn’t — left the state of Texas. So he called his parents, who don’t understand his love for drag, to tell them his location.

“This is what this career has done for me,” he recalled saying.

Another trip — this one to New York City — fulfilled a lifelong dream to perform in The Big Apple. He spoke to the audience and couldn’t contain his emotions as he recalled growing up in Texas in a family that doesn’t comprehend his passion for performing, and how he got his start.

As he continues to perform, Toni also is giving back. He supports organizations devoted to helping the homeless and providing education on sexually transmitted diseases. He uses his platform to encourage people to take care of themselves and be a blessing to others. He remains devoted to the LGBTQ community.

That’s another reason why he is looking forward to performing at What A Drag! He knows audience members will be dazzled and entertained and it’s for a good cause — helping the HLEC.

“We’re an incredible group of people, we have interesting perspectives and experiences that transform us as human beings in what we do,” he said.